Leading bartender Monica Berg, of Himkok fame, discusses the challenges, trials and tribulations facing the global bartending industry. How to Spend It → July 21, 2017 Norwegians love foraging so much they actually have a helpline that tells you when to go mussel picking. 18.6k Followers, 1,197 Following, 2,335 Posts - See Instagram photos and videos from / M O N I C A B E R G /💕 (@monicasuh).

Do you hear that? That’s the sound of bartenders dusting off their shakers throughout the country as bars and restaurants start to reopen. It’s safe to say that 2020 has put us all through the wringer, but especially those behind our bars.

Of course, in a crisis, we often find it’s the women who adapt the fastest and spring into action, and we’ve definitely seen that this year! In celebration of these fearless ladies who are ruling the industry, we are giving a special shout out to the cocktail goddesses who have been shaking up the drinks’ industry since before COVID-19 hit our shores and have since been creative in support of the hospitality industry during this challenging time.

Two of the world’s best-known barmaids to have paved the way for female bartenders around the globe were Ada ‘Coley’ Coleman and Ruth Burgess from The Savoy, London. Coleman was head bartender for twenty-three years, and the inventor of the ‘Hanky Panky’ cocktail. She was joined by Ruth Burgess, known affectionately as ‘Miss B’ or ‘Kitty’. After decades of pouring cocktails the pair left, making way for the next series of legendary female bartenders to take centre stage.

The woman behind the popular Inverroche Gin, Lorna Scott says her peers didn’t exactly roll out the red carpet when she entered the business. No matter, today you’ll find Inverroche on the shelves of pretty much any liquor store and in 16 countries across the globe. “I believe that over the years we have already seen a big shift in this male-dominated industry with more female winemakers and distillers coming to the fore than ever before, but we still have a long way to go.” 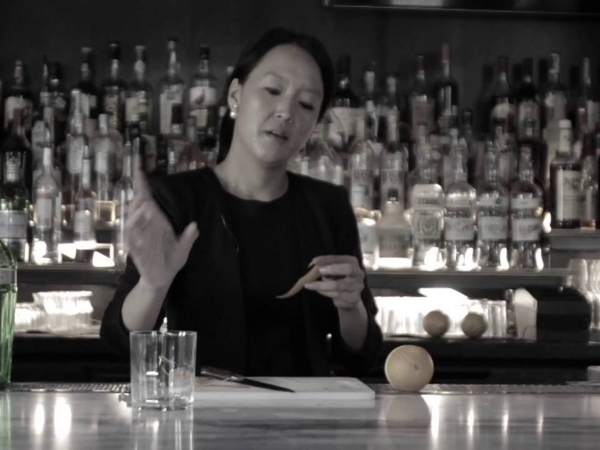 The talented Nkuli Khanyile has made it her mission to put African women on the map in the bartending industry, having been named joint winner in the Newcomer of the Year category at the 2019 BAR Awards. Now, as she rolls up her sleeves to get down to business, she says she’s excited about what the future may hold. “I was often afraid to speak up and voice flavours that I tasted but eventually got the courage from other females who were making changes to the stereotype and got more involved.”

Cassandra Eichoff has placed mixology education and mentorship at the forefront of her career as the director and head instructor of European Bartender School. While the school had to close its doors for lockdown, she got inventive with the empty space, called in the bar reserves and got them to apply their skills to cleaning cars as ‘The Cartenders’. Cassandra has seen the industry change in that more women are being head-hunted for their skills and mindset. “For this to continue, it’s up to us that are in these positions currently to keep the movement going and ensure that it doesn’t only reflect as a short-lived trend, but rather a way of business.”

With her new bar making it into The World’s 50 Best Bars 2019 and herself named the winner of the Bartenders’ Award as voted for her by her peers; Monica Berg is a bartender, entrepreneur and global industry leader. Throughout her career in the industry, she has noticed a big change with regards to the acceptance of female bartenders, yet she is keen to shift the conversation beyond gender as she adapts to the times. “I would love to come to a place, not only in our industry but in society in general, where it’s a conversation about individuals rather than gender,” she says.

Shana Rajahram is a giant on the Caribbean drink’s scene. As the only female finalist at the Angostura Global Cocktail Challenge 2020, she had the honour of not only representing Trinidad and Tobago on her home turf but also women. “Initially when I first started moving my way into the bar as a female, it wasn’t welcoming. The guys gave me a very hard time for invading their playground; however, I journeyed along and met some amazing people in the industry who fell in love with my style and craft and helped me.” She now rules the roost as the 2018 Caribbean Bartender of the Year.

As an award-winning South African drinks writer and cocktail competition judge and general booze enthusiast, Leah van Deventer has been putting SA’s drinks-scene on the pages of magazines, newspapers and blogs for many years. Though Leah is considered one of the leading voices of the drinks industry, she still thinks it’s very much a man’s world. “I’ve had my understanding about subjects like spirit production challenged many times, and often people will assume a man knows more than me simply by virtue of their gender.” But it’s changing slowly. “This year was the first that saw a 50-50 gender split across judges for The World’s 50 Best Bars. We need to ensure this is the norm, and that women not only contribute to these sorts of panels but that they lead them.”

Once upon a time, some might have said that the bar was no place for a lady, but today’s women are proving them wrong and trumping the boys for their spot at the top.

A year ago, it would have been unimaginable that Tayēr + Elementary would become an off-licence. Monica Berg diarises her temporary change of professions.

In Norway, where I’m originally from, you can only buy alcohol from state-owned monopolies, so the concept of an off-licence is actually quite exotic to me. I’ve always wanted to work in one.

In an odd twist of fate, my wish came true this year. In the past 12 months the bar has only been open for less than a third of them - we’ve been an off-licence for two and a half months now.

Back when the first lockdown hit us, we were unsure of how we should react. Because we are in a Special Policy Area and didn’t have the necessary licences, we weren’t able to open for take away. It forced us to be creative - and pushed us in a slightly different direction to many others – ultimately leading to the creation of the RTD’s whilst applying for our off licence. Honestly, I don’t think Tayēr + Elementary would exist today if we hadn’t.

Running an off-licence and online shop is very different to running a bar. I’ve had to learn new skills – mostly slowly. It took me two weeks to figure out how to build a web shop (thanks google and YouTube), which, according to our friend who does programming, should take three hours. I’m finally starting to understand London postcodes and distances. I now know that just because you recognise a name from a bus, does not mean it’s close by. That epiphany came on a bicycle delivery to Richmond in -1C. I guess my dad was right when he used to tell me: “What the head lacks, the legs will pay for.”

Nowadays, excitement is a new cardboard box that builds faster than the one I used before, or when I manage to make a bicycle delivery without using phone navigation. For Christmas, my team gave me a DHL t-shirt, as they felt it was more representative of the work I do now. They are not wrong.

While I’m incredibly grateful I still have a job, I don’t think there’s ever been a time in my career where I’ve been less excited about my work than right now. Mostly, because it’s so predictable, but also, because there is so little of that familiar interaction I used to have with other people.

Will I come out of this restricted existence wanting a more predictable and comfortable day-to-day, rather than chasing the adrenalin of service? Will I get so used to being in bed by midnight that I won’t be able to go back to 3am finishes after ‘deep-clean’ Saturdays?

These are all questions I don’t yet know the answer to, but as re-opening edges closer, I’m looking forward to being a bartender again. The nature of bars and restaurants is that you are there when it happens. You experience everything in real time, meaning you get instant feedback from guests, and with that, also instant gratification when you see them happy. This has always been the magic moment for me, the ‘high’ I always seem to chase and ultimately, why I’ve chosen this industry as my home.

I miss the team being together and talking shit, having our Saturday Martini after cleaning the bins. And most of all, I miss the thrill of having one of those services; the near perfect night when everything just works. Where the guests are brilliant, the team is ‘one’ and everyone feels it. Because, for all the structure and early nights of running an off-licence, the highs of hospitality are hard to match.