MediaTek is following up on its AI-centric P60 chipset with a new more polished platform. The Helio P70 promises a 10-30% boost in AI tasks and a 13% improvement on general tasks. That said, things haven’t changed that much from the P60.

The MediaTek Helio P segment chipsets are designed for slim profile smartphones. With the MediaTek Helio P series, we focused on optimizing the systems-on-chip for battery efficiency without overly-compromising on performance and user experience. Premium MediaTek Helio features like multimedia and connectivity are still central to its design. On the other part, Helio P70 also has an Octa-Core CPU. There are 4 Cortex-A73 cores clocked at 2.1GHz and 4 Cortex-A53 cores clocked at 2.0GHz. In simple words, Helio P70’s CPU has 100MHz higher clock speed for powerful cores and 200MHz little cores than Snapdragon 665. The Mediatek Helio P70 is an upper mainstream ARM SoC for smartphones (mainly Android based) that was introduced in 2019. It is manufactured in a 12 nm FinFET (12FFC) process and is equipped with. 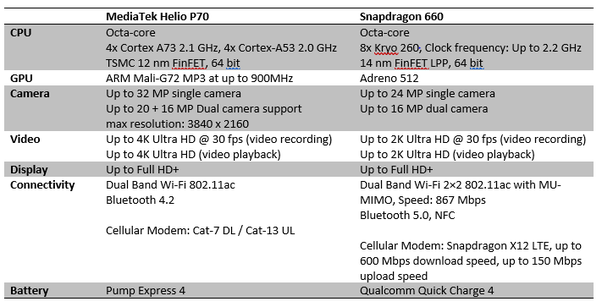 The new chipset is built on the same 12nm process, but it runs both its CPU and its GPU at higher clock speeds. On the processor side, the four big cores, Cortex-A73, now run at 2.1GHz. Meanwhile, the Mali-G72 MP3 GPU is now clocked at 900MHz. There’s a table below with more details.

The Helio P70 claims to use up to 35% less power in popular games compared to the P60, despite the bump in performance. Energy Aware Scheduling+ is a thermal management solution that promises to lower operating temperature by up to 4.5°C (the P60 had the non-plus version of this tech). 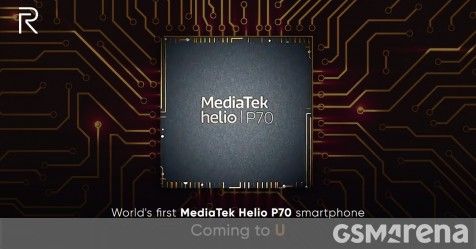 The chipset has hardware to do the heavy lifting when it comes to camera effects. Bokeh is rendered at 24fps, a 3x improvement in performance. It has a hardware warping engine for low-power electronic image stabilization (MediaTek says it saves 23mA per second vs. doing it on the GPU).

This was a very cool upgrade from P60 as it made gaming experience so much better! Now P90 is in the market and it will change the whole thing!

.....And it seems I was right indeed. https://www.gsmarena.com/realme_will_use_the_helio_p70_in_upcoming_phones-news-33910.php